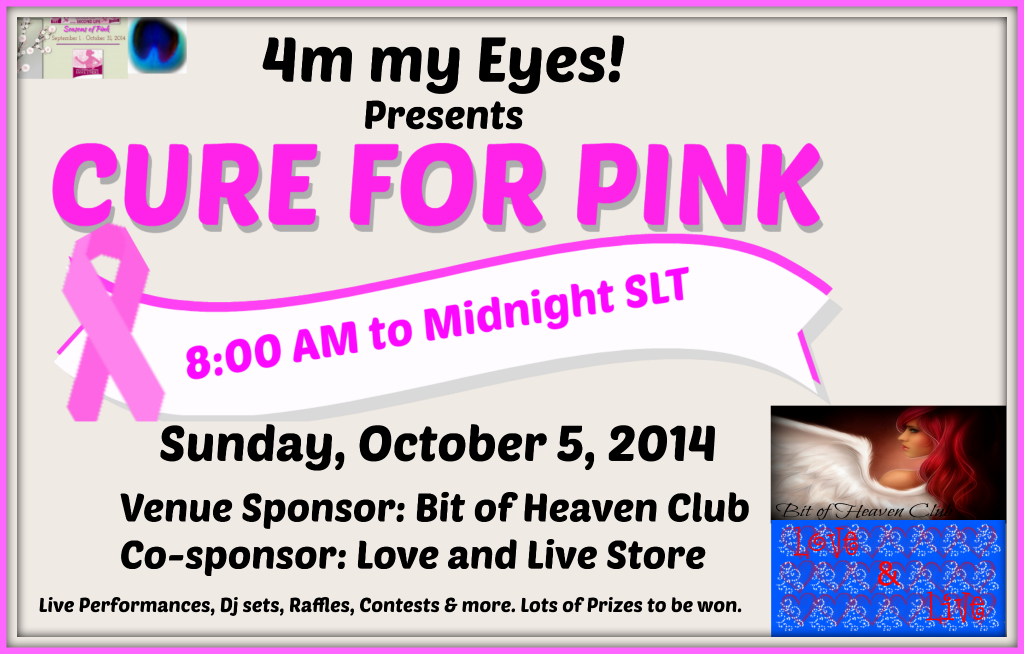 The first 4m my Eyes Initiative. It was the first fund raising event for Making Strides Against Breast Cancer Across Second Life. [RFL of SL]Theme: Seasons of PinkTime: 8:00 am to MidnightDate: Sunday, 5th October, 2014Venue: Bit of Heaven ClubCancer Survivors and Caregivers shared their real life stories. The event started at 8 am SLT, with Dj Corolla Michigan. Followed by live performance of Trinity Ermintrood at 10 am SLT, 2014, Winner of SL' Got Talent 2014. Dj Darnita, who is also the venue co-owner, played awesome tunes at 11 am SLT.
At 12 noon, my sweet partner in crime, my co-blogger and blog manager Britney von Prague sang songs on request. At 2 pm we had DJ Edward take over the stream, followed by DJ Nick, Dj Darnita again and Dj Darklord.

Every set had raffles, a lucky winner was given RFL Dragon or an item from Love and Live store, which was our co-sponsor. They also auctioned items. throughout the whole event. The auction boards closed at 11 pm SLT.
We raised the first L$10k by 1 hour and 48 minutes, another L$10k while Trinity sang for the crowd, L$5k while DJ Darnita played for an hour. From noon to 2pm another L$10k. I would like to mention about a resident, Richard who challenged everyone that if we reached the goal, he would contribute 5k more. He donated a total of 15k in the process. The goal had to be increased almost after every set. By the end of the day, we had a total kiosk donation of L$52,800 which is 211.2 USD. If the raffles and auctions are added, the total donation comes to L$ 54,000 which is 216 USD.

At the end of the event after all the challenges, Richard has promised to remain bald for a week, Darnita will be wearing Pink for a week and Debby Sharma will blog bald for 5 days at 4m my Eyes.

All donations, raffles and auctions were done by the kiosks provided by RFL of SL' Making Stride Against Breast Cancer Across Second Life.